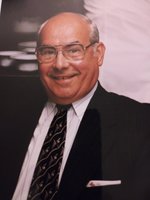 Richard was born in Phoenixville to the late Stephen Rosmos and Emma (Torhan) Rosmos . He was a graduate of Phoenixville High School, Temple University, and Eckels Mortuary College.

Richard enjoyed driving his 1956 T Bird in the Dogwood parade every year, traveling, and spending time with family in Ocean City, Maryland.

Visitation for friends and family will be held at the R. Strunk Funeral Home, 400 Main Street, Phoenixville, PA Sunday, November 15, 2020 from 3-6 PM.  Masks are expected and social distancing will be maintained.

Online condolences can be made  at www.rstrunkfuneralhome.com. All arrangements are being handled by R. Strunk Funeral Home, Inc.  Phoenixville, PA 19460.