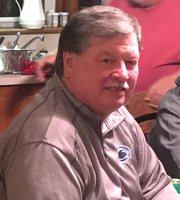 Gene Bernat passed away Friday, March 19, 2021, at his home.  A lifelong resident of Phoenixville, Gene was born to the late Henry “Hank” and the late Dorothy (Hallman) Bernat.  After graduating from Great Valley High School, Gene joined the ranks at Phoenix Steel until it’s closing. He then joined his brother John, working at Richard’s Appliance Sales & Service, in Spring City, for over twenty years.  He greatly enjoyed interacting with people.

He continued the family tradition of working with sports, volunteering his time supporting the Babe Ruth Organization, as Coach and Commissioner.  Gene coached the Phoenixville Junior Legion team and volunteered for PMYC as an announcer and coach for many years.  He was the Athletic Director for Holy Family School’s CYO Athletic program for eleven years.  Anyone who knew Gene, knew of his passion and loyalty to Owen J. Roberts football and his favorite collegiate team, Penn State.   He wore his Penn State attire proudly!

Gene cherished and was extremely proud of his granddaughters and did not like to miss any dance recital or opportunity to see them perform.

Gene leaves behind his wife, Barbara "Babs" Bernat of Phoenixville

Granddaughters:  Sara Rose and Leah Catherine Bernat and many nieces and nephews.

In lieu of flowers, donations can be made to the Springer Studios Youth Theatre https://www.thespringerstudio.com/store/p132/DONATION.html and Babe Ruth of Phoenixville, PO Box 494, Phoenixville, PA. 19460.

Online condolences can be made at www.rstrunkfuneralhome.com. All arrangements are being handled by R. Strunk Funeral Home, Inc. Phoenixville, PA.  A video recording of the funeral service is below.