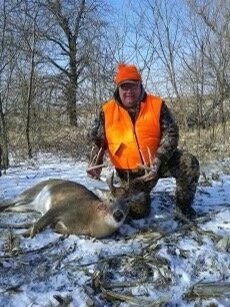 John Youk, 66, spouse of Dottie DeStefano, passed away suddenly Sunday January 16, 2022 at Abington Lansdale Hospital with family by his side.

He was born January 13, 1956 in Doylestown, to the late John A. Youk and the late Ethel (Morgan) Youk.  A Bucks County native, John graduated from Central Bucks West.  He had a passion for hunting, carpentry, cooking, the LA Dodgers and Nascar. In his younger years he became a union carpenter and also became a proprietor of his own auto body shop. John was an avid hunter and always looked forward to the hunting season and hosting his annual game dinner with family and many friends. John always loved Nascar and his passion for it blossomed when James Hylton asked him to be his jack man in the early 80’s and he has been involved ever since. Later on he was employed by SABCO racing as a gas man and cook, then moved on to Stewart-Haas Racing as the team chef.

A Celebration of Life Service will be held Saturday January 22, 2022:

Friends may visit from 10 to 11, followed by the service.

Donations in John’s name can be made to:

Online condolences can be made at www.sgsfuneralhome.com. All arrangements are being handled by Shalkop, Grace & Strunk Funeral Home, Inc. Spring City, PA.

Share Your Memory of
John
Upload Your Memory View All Memories
Be the first to upload a memory!
Share A Memory