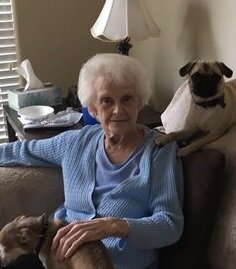 Please share a memory of Marian to include in a keepsake book for family and friends.
View Tribute Book

She was born January 28, 1932 in Tioga County Pennsylvania, to the late Richard and Helen (Dean) Estes.  Their family moved to New Jersey where she met and married Angelo Tamburro.  The Tamburro family moved to the Orlando area where they raised their wonderful family.  Marian retired as an insurance underwriter in the Insurance industry.

A Memorial Mass will be held on Friday, July 22 at 11:00 AM at St. Joseph’s RC Church, 3640 Schuylkill Road Spring City, PA 19475.   Online condolence can be made at www.sgsfuneralhome.com. All arrangements are being handled by Shalkop, Grace & Strunk Funeral Home, Inc Spring City, PA.